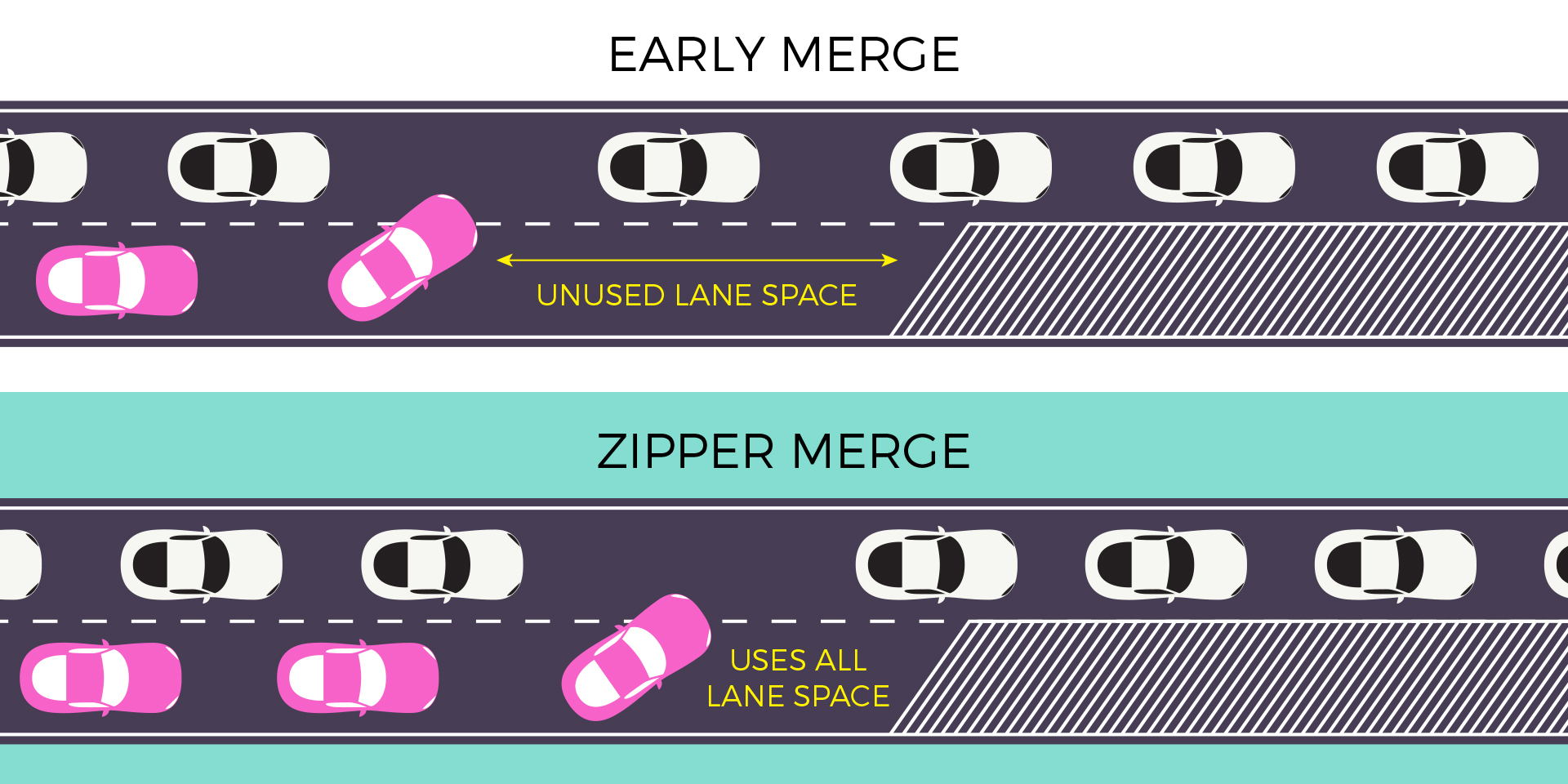 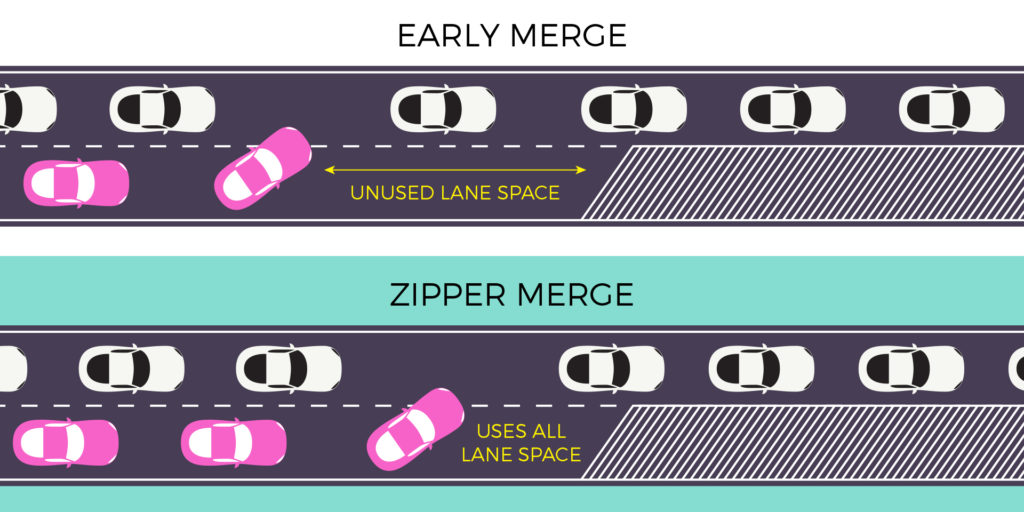 Believe it or not, traffic experts universally agree that the zipper merge is the most effective merge technique to keep traffic flowing and save everyone time in the process – contrary to what our blood pressure might indicate.

Approaching a “Lane Closed – Two Miles Ahead” warning sign is the last thing anyone wants to see on their way home from work. What makes matters worse is the jerk who then waits until the last minute to merge who acts as if they never saw the same warning sign notices for the last two miles.

Our blood boils and these late to merge drivers remind us of our days in high school when someone cut the lunch line. We have all been in that awkward situation where we waited until the last minute to merge at a lane closure (only to have to mercifully plea with the drive next to us to let us over).

However, what if we told you that the jerk who waited until the last minute to merge (or the time you did the same thing) actually saved everyone else time by using the zipper merge technique?! What if this simple idea is happening to change how cities make auto transit more efficient?

In our last article, we debunked the flashing your brights myth in order to change a traffic signal to green, and today we will expand on why the zipper merge technique and similar technology is responsible for more efficient transit within cities.

Why the Zipper Merge is Most Effective

Here’s a metaphor to help you understand why the zipper traffic merge technique is actually more effective.

Imagine a 16-ounce water bottle filled three-fourths of the way full, how many ounces could you add to that water bottle?

The answer is obviously four more ounces. Now imagine if you wanted 16-ounces of water and you placed 12 ounces in one bottle and the other four in another. You have now effectively wasted 16 ounces of space – 12 in one bottle and four in the other.

Regardless of what we all might think or feel, traffic experts widely regard that the best and most efficient way to combine two busy lanes of traffic is to use the zipper merge approach.

Similar to our silly water bottle example, just like you wouldn’t carry 16 ounces of water in two different bottles, you wouldn’t leave lanes wide open, would you?

The zipper merge technique is actually simple to conceptualize, it works because you make use of all the lane space!

What you should know about the ‘Zipper Merge’

Using all of the available lane space makes sense. Consider this:

Hypothetically, imagine on your way home from work there is a one-mile lane closure ahead. When you notice the sign that says “Right lane closed two miles ahead,” you get over along with everyone else. What has actually occurred is the one-mile closure has essentially become a three-mile lane closure.

Now if hypotheticals and water bottles don’t do it for you, consider these facts:

The Positive Result of Zipper Merging

If you want to get home faster and curb your road rage;

All jokes aside, the zipper technique has not only helped increase traffic flow, states have put the method into law that requires motorists to merge using the zipper method.

With high incidents of accidents typically occurring near merging areas, city municipalities are recognizing the positive effects of the zipper merge. It is changing how technology can be leveraged to improve transit in congested cities.

Leveraging the zipper merge to increase transit efficiency is a positive step in the right direction, but much of its effectiveness will come down to individual driver understanding. However, technological advances have taken the zipper merge concept and infused it with transit technology.

As congestion increases head starts and bypassing opportunities become vital to efficiency. The increased transit performance and the ability for emergency vehicles to reach their destination quicker, mean safer roads and safer cities.

Watch below to see how the “Queue Jump Lane” concept works: